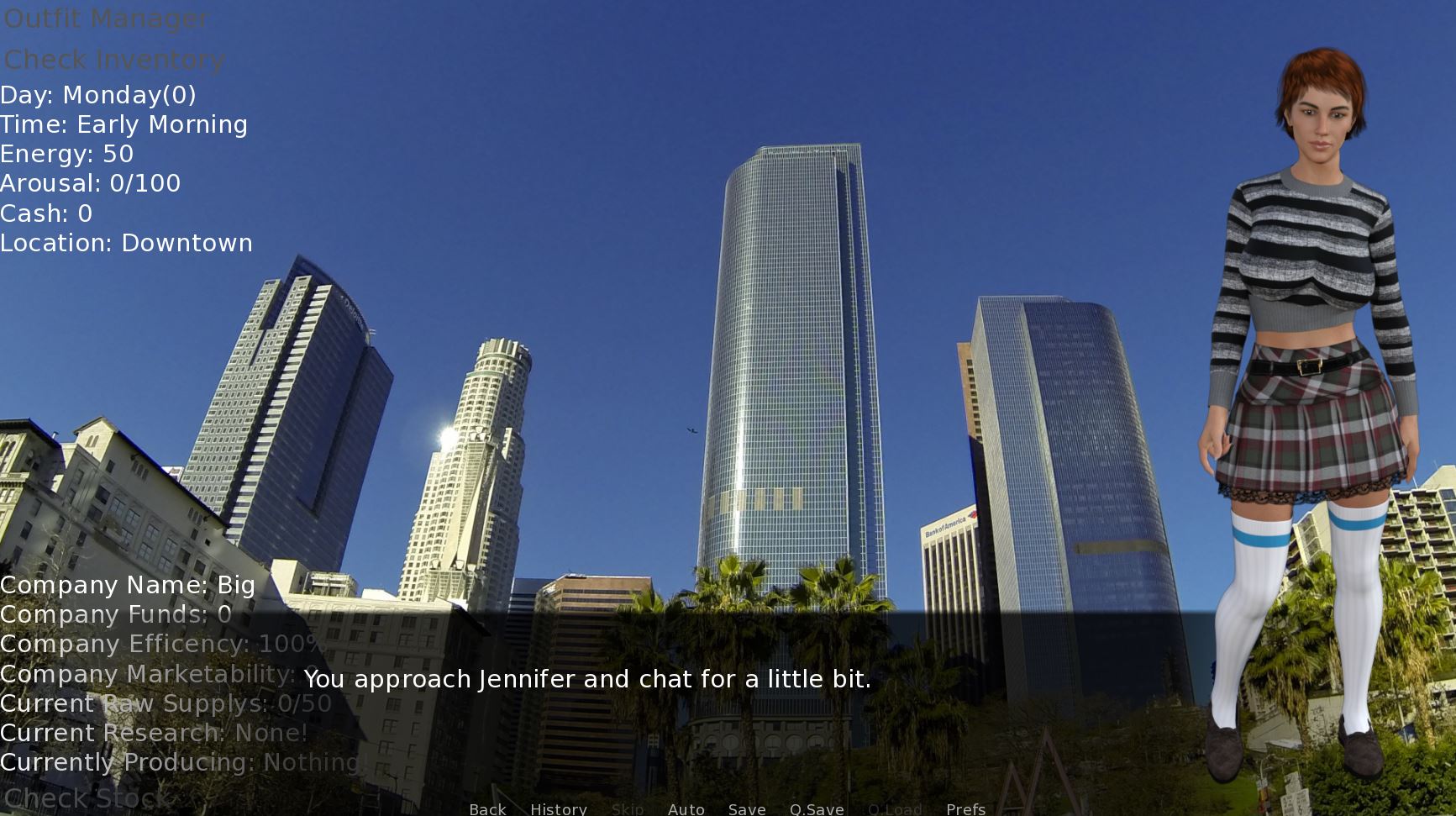 Lab Rats 2 – Down to Business.
Lab Rats 2 is set shortly after the events of the Lab Rats 1, but will not require any knowledge of it to enjoy. The game will focus on corrupting your female employees as you build your pharmaceutical empire. The game will feature procedurally generated girls, a detailed clothing and outfit system, and a complex sex system.

– Some purchased policies can now be toggled to be active or inactive. Some policies are always active when purchased.
– Added support for policy fuctions when applied, removed, on each turn, or on each day beginning.
– Redesigned policy purchase screen. Now allows you to select a policy without purchasing it, instead of requiring you to hover.
– Adjusted policy purchase screen style to match the rest of the game.
– Some policies now require lower level policies to be active before being activateable.
– Active policies that are required by other active policies can not be disabled.
– Policy info screen now shows what other policies are preventing you from enabling/disabling a policy.
– Uniforms may now be invalid if uniform policies are deactivated after they are defined. Invalid uniforms will not be worn until the appropraite policies are activated.
– Girls will change out of newly invalid uniforms if they are not naturally slutty enough to wear it anyways.
– Added a disabled slug to set daily serum action when policy is owned but disabled.
– Added full suite of taboo break dialogue for Rebecca.
– Removed generic “Seduce” option.
– Added “Grope” option, available on all girls once sluttiness is 5 or higher.
– Added multiple tiers to grope action, leading to entering the normal sex system at high enough Sluttiness.
– Added “Command” option, available on all girls above 100 Obedience.
– Moved “Command her to take serum” option into the general “Command” menu.
– Added “Command her to let her touch you” option. Allows you to enter the normal sex system at high enough Obedience.
– Added public sex check and dialogue to grope and command sex options.
– Redid flirt dialogue, now has three tiers for different levels of Love. Highest level may also lead into sex system.
– High or low happiness now has a minor effect on sluttiness.
– Added “Command her to strip” option, with three possibilities: Show me your tits, show me your underwear, and get naked.
– Girls will now only attempt to take control if you try and stop having sex when they have at least some (30+) energy.
– Removed generic option to “give” anyone serum (note: you can still “Command” someone to take it).
– Moved policy based requests for employees to test serum to an employee specific action.
– Implemented support for partial clothing based on body regions, available to modders to make use of.
– Slightly expanded “Kiss me” option for early Mom morgage help payments.