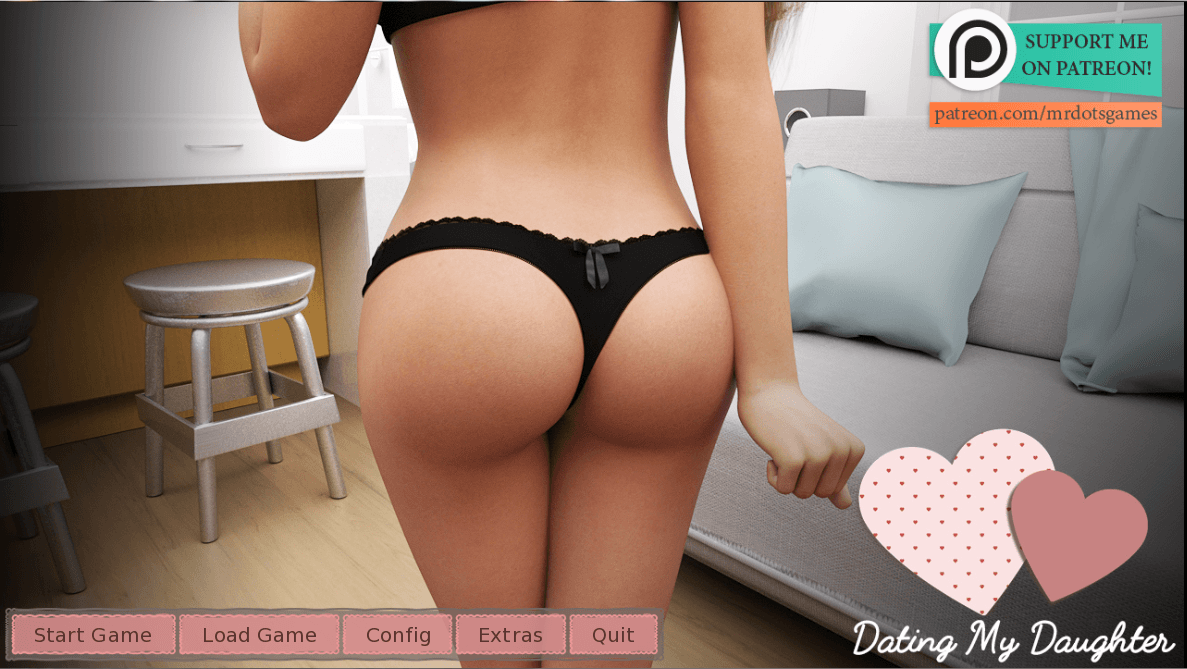 You’ll assume the role of a divorced dad who hasn’t seen his daughter in years. Now that she’s 18 years old, she contacts you and tells you that she would like to have a “dad-daughter” date with you. You’ll have the chance to get to know your daughter better, build a special relationship and why not, maybe convince her to have more “dad-daughter” dates with you in the future

You’ll be making choices between two or more decisions that will negatively or positively affect the outcome of the date and the main story as well.

There are two stats (at the moment) in the game: Friendship and Love. You can see them at the top right corner of the screen.

Every time you make a choice, you’ll win or lose a point (sometimes more than one) depending on the decision you make. For example, if you choose to stare at your daughter’s ass and she catches you, you’ll lose 1 friendship point.

You’ll have to get a certain amount points to advance in the game. If you fail, you’ll have to repeat the date.

There will be secondary characters like your ex-wife, your daughter’s best friend, your coworkers, etc. but the main focus will be on F/D content.

– Chapter 1 logo added.
– Changed main menu background image.
– Walkthrough revised and Rewards unlock list added.
– Fixed stats counter.
– Reworked the whole FP/LP system. Now it’s harder to get points.
– Fixed some renders on Day 1 (F’s skin)
– Fixed some renders on Day 2 (F’s skin)
– Fixed some renders on Day 3 (F’s skin)
– Fixed some renders on Day 4 (F’s skin)
– Replaced some old dialogue from Day 1 and 2 (In the old script, a week passed between day 1 and 2. Now it has been replaced by just one day)
– Game over at the café removed.
– Removed the other two job routes ☹
– Added limit to the kisses disco.
– Removed option to “Let her sleep” on Day 3. Father now always gives D the shirt she wears the next morning.
– Added boob points to hospital scene.
– Fixed Day 5 Lucas and Richard’s talk at the bar.They won’t mention that D won the contest if you didn’t accept Richard’s proposal.
– Fixed Richard proposal on Day 6 at the park. If you reject him, you won’t see his photoshoot scene.
– Playing with D’s nipples on the morning of Day 7 doesn’t lead to game over anymore.
– Fixed bad renders during the pool hall game (Day 8)
– Added condom offering scene (Day 8)
– Removed game over at the beach when touching pussy massage.
– Removed game over massage day 7 night when touching pussy
– Fixed police report not filling and going anyway (Day 10)
– The first scene on the morning of Day 11 was changed a bit. D sounded too adult when she spoke to herself and didn’t match her personality.
– Georgina lunch scene on Day 11 was completely changed. Thanks Jeff Steel for your contribution.
– Fixed Lucas renders where he was spying on D and F from the balcony.
– Moved D and F’s photoshoot to Day 12, where it belongs.
– Now you should be able to access to each photoshoot correctly.
– Tone down F’s perviness on Georgina and Richard’s photoshoot.
– Lucas game over scene was extended a little bit.
– Added F’s naked picture request to Richard photoshoot.
– Added the choice to flash D’s boobs during their lunch at the 50’s diner.
– Fixed wrong dress boxing night.
– Fixed F addressing D as a girlfriend on the clothing shop (Day 12)
– F kissing D’s pussy during the evening of day 12 was fixed.
– Added Lucas and Richard scene at the police station (Day 13)
– Fixed bug where D suddenly changes her secretary outfit while giving HJ
– Added HJ scene at the office when D wears the secretary outfit.
– Fixed many other minor bugs, missing screens and dialogues that didn’t change with your decisions. Too many to list.